As a 17-year-old Montanan, I’m gravely disappointed at Turning Point USA for showing disrespect and dishonor to the first leg of the Gipper’s Stool. I was named after Reagan, and I appreciate his legacy. I am a Christian and social conservative. I am a fiscal conservative. And I believe that America should protect its strategic national interests internationally (with a firm definition of what that means, and so far as it benefits the American people first).

But let me be clear: What happened recently at TPUSA was perverse, unwholesome, and I believe contrary to the traditional American values that hold our nation (and party) together.

Every year Turning Point USA (TPUSA) attracts thousands of teenagers to its various “conservative” events. TPUSA, with thousands of Instagram, Twitter and Facebook followers regularly champions the right to free speech, capitalism, anti-intersectionality and supposed Christian or at least traditional American values. Its influencers and chapters around the country set out to share these ideas on national, local and worldwide levels.

Any conservative parent sending their child to one of the many events TPUSA hosts presumably believes that TPUSA is a hardcore pro-freedom organization dedicated to sharing conservative values with the next generation. High School students and children as young as 13 attend these events expecting to learn conservative values and their applications.

While some of these event headliners, such as Tucker Carlson’s phenomenal SAS 2020 speech, do share true conservative values, TPUSA as an organization has done everything but support the ideas they champion.

At the “conservative” conference, Student Action Summit (SAS), TPUSA has allowed scantily-clad dressed women promote the “Bang” energy drink in a performance reminiscent of a censored magazine cover behind the counter at Town Pump. TPUSA allows one of their most popular self-proclaimed “conservative” influencers, Alex Clark, namely, to post topless photos on Instagram for her thousands of underage, impressionable followers. 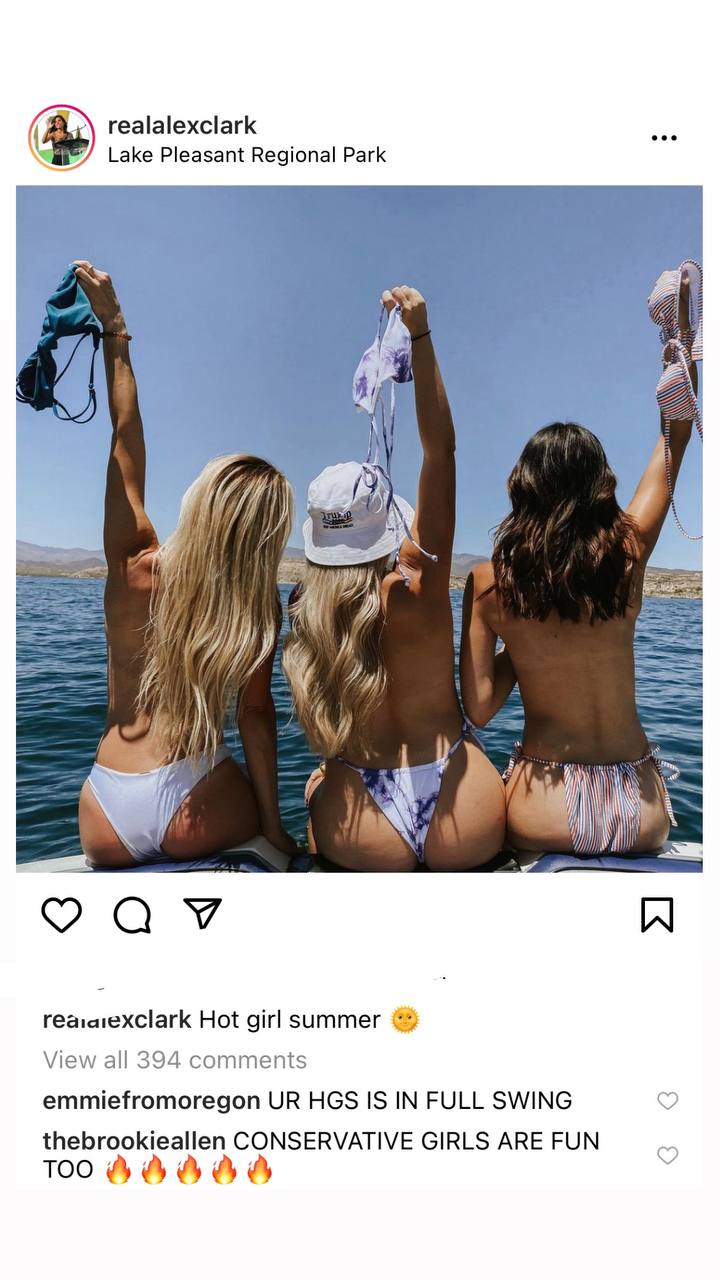 TPUSA has long touted the first amendment, which is good and well, of course. Their influencers shout slogans such as “All speech is free speech,” yet when TPUSA’s rivals are banned on Twitter and every other mainstream social media platform, they rejoice. Not only do they rejoice, they go on to blacklist conference attendees who defend the right to free speech.

While the next point may be wildly controversial (but should not be among the first leg of the Gipper’s Stool), the LGBTQ agenda is not conservative. Although it is wholesome treat the LGBTQ community with respect and dignity (while sharing our opinions mutually), it is the American nuclear family, marriages, and children that will be used by God to save this country and culture (as pointed out in Tucker Carlson’s speech last year, hyperlinked above). It is TPUSA’s discretion whether to welcome LGBTQ influencers to their conferences, which they do and regularly host homosexual, Rob Smith, but in doing so they ostracize devoted Christians who believe that monogamous heterosexual marriage and child-bearing are essential to America’s future. While the Democrats are killing their kids, Republicans should be having more of them.

In a video released by TPUSA, Isabel Brown, a prominent influencer, speaks on homosexual persecution. She proudly says “America is among the most progressive places on Earth!” It seems TPUSA needs to be reminded that the opposite of conservatism is progressivism, and it is not a good thing.

Not only does TPUSA tout America’s acceptance of the LGBTQ community, but they also endorse and supply young adults with various LGBTQ stickers, pins, posters and other merchandise in their “activism kits,” intended to convert other young adults to the TPUSA freedom train.

Do we want to grow the conservative movement without growing conservatism? If so, what’s the point?

It would not surprise me if many are not bothered by TPUSA’s acceptance of the LGBTQ, I myself am not bothered by this- only that they invoke the name of conservatism to champion it.

From what I’ve seen from TPUSA, they still haven’t embraced transgenderism, per se, however they have no problem fraternizing with “conservative” drag queens. Charlie Kirk can be seen standing happily next to “Lady Maga,” a popular right-wing drag queen for a photo-op. TPUSA publishes articles entitled “Taking on the LGBT-Cult” yet the founder of TPUSA is perfectly fine accepting a man pretending to be a woman, as long as it is only for a few hours.

It should be mentioned that children as young as 13 attend this conference and all attendees are approved by TPUSA. The application to attend the conference includes listing social media platforms, meaning TPUSA had full knowledge of this woman and her occupation when welcoming her to the conference. 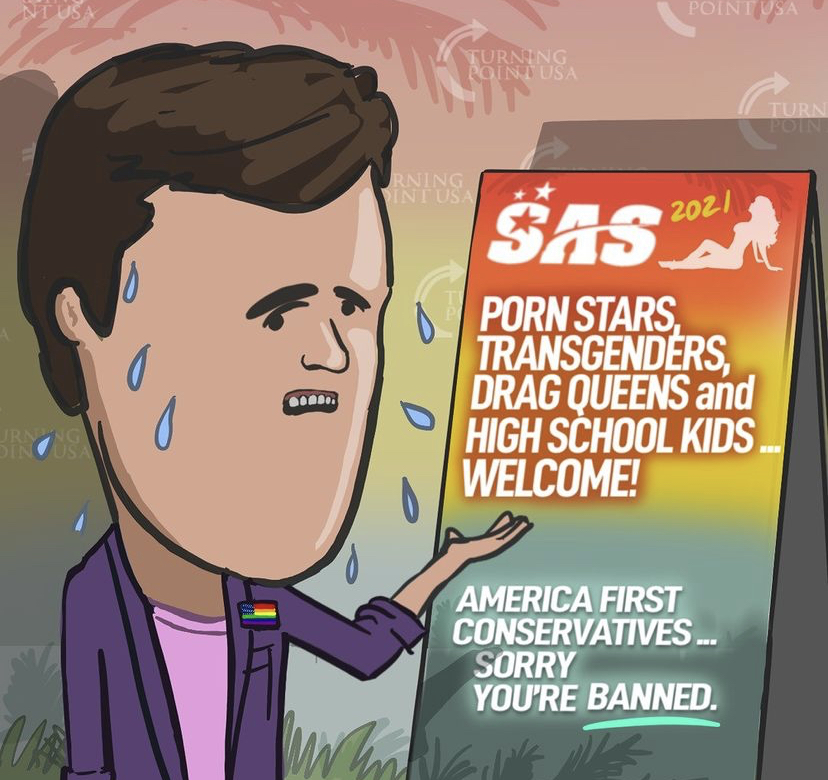 From a bystander’s view, we can recognize that TPUSA is not appreciating those of us who intend to live morally, modestly, and change America by championing our values. I ask the question, what do TPUSA’s recent actions say about their values? The trouble comes with TPUSA calling themselves conservative and leading their thousands of young followers to believe that this is what conservatism is. It won’t be a leap when those true conservative kids look around at the rampant degeneracy and lack of respect for basic conservative principles endorsed by so-called “conservatives” and think to themselves “I guess I’m not conservative!” and instead opt for a more dangerous identification.

What it means to be conservative is not something that changes. Though the culture may change and cancel culture consumes itself trying to keep up, the beauty of conservatism is that it is – and it is intended to be – the same yesterday as it was the day before, and the decade before that. All of these compromises made by TPUSA including the rejection of dignity and modesty, acceptance of LGBTQ propaganda and flamboyant drag queens, rejection of purity, will not spread the tent of conservatism. These compromises are made in efforts of keeping a culture that is drifting further left every day satiated, not in the name of supporting true conservatism.

TPUSA compromising so greatly on some of the most important political views a conservative holds is regrettable, but the ones they aren’t addressing leave a void to fill in the political sphere. It is not only in the hearts of young Americans to fight against socialism but to see the end of a government run by corporations and banks, conserving and protecting the family unit, leaving sex to be cherished and maintaining basic modesty, removing Americans from fighting endless wars and a range of other important and untouched political matters.

Conservatism is about so much more than low taxes and small government.

[Editor’s note: While this article was being revised TPUSA corrected their decision to invite Brandi Love to their conference as a VIP. It should be noted that this decision came after backlash from true conservatives]

A CALL TO ACTION:

Bringing you conservative news and commentary means it is tough out there on social media. We’re constantly getting kneecapped and constrained by tech companies who find the truth intolerable, resulting in our reach being severely throttled.

For this reason, please consider supporting us directly. If you like what you are reading and desire to to see more, please support our work here.

Wilcoxson’s Ice Cream (Based out of Livingston, MT) on Hold Due to Various Factors

Wilcoxson’s Ice Cream (Based out of Livingston, MT) on Hold Due to Various Factors

The King of England and “The Great Reset” Naive and Dangerous

Never Underestimate ‘Granny’ Who Works Out at YMCA (video footage within)

News BY Montanans FOR Montanans